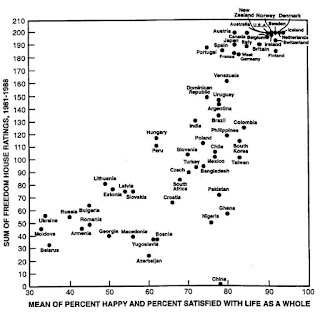 According to Wikipedia, the Easterlin Paradox is a key concept in happiness economics. Theorized by economist Richard Easterlin in the 1974 paper "Does Economic Growth Improve the Human Lot? Some Empirical Evidence," it proposes that, contrary to expectation, economic growth doesn't lead to greater happiness. It quickly caught fire, as Easterlin became famous beyond famous, and the paradox quickly became a social science classic, cited in academic journals and the popular media. As the New York times says, the Easterlin Paradox tapped into a near-spiritual human instinct to believe that money can’t buy happiness. Although there have been attempts to debunk the Easterlin Paradox, I believe the concept applies quite well to Web 2.0 and the information overload it has presented to the current state of the Web.

As one information expert has put it, Web 2.0 is about searching, Web 3.0 will be about finding. Well said. That is exactly the problem about Web 2.0. There are a plethora of excellent free and very useful tools out there - blogs, wikis, RSS feeds, mashups - but at what point does it become too much? Recently, I noticed that my Google Reader has gotten out of hand. I just can't keep up anymore. I skim and I skim and I skim. I'm pulling in a lot of information, but am I really processing it? Am I really happy with the over abundance of rich content of Web 2.0? Not really. Are you?
Posted by Allan at 6:28 PM

Many institutions limit access to their online information. Making this information available will be an asset to all.