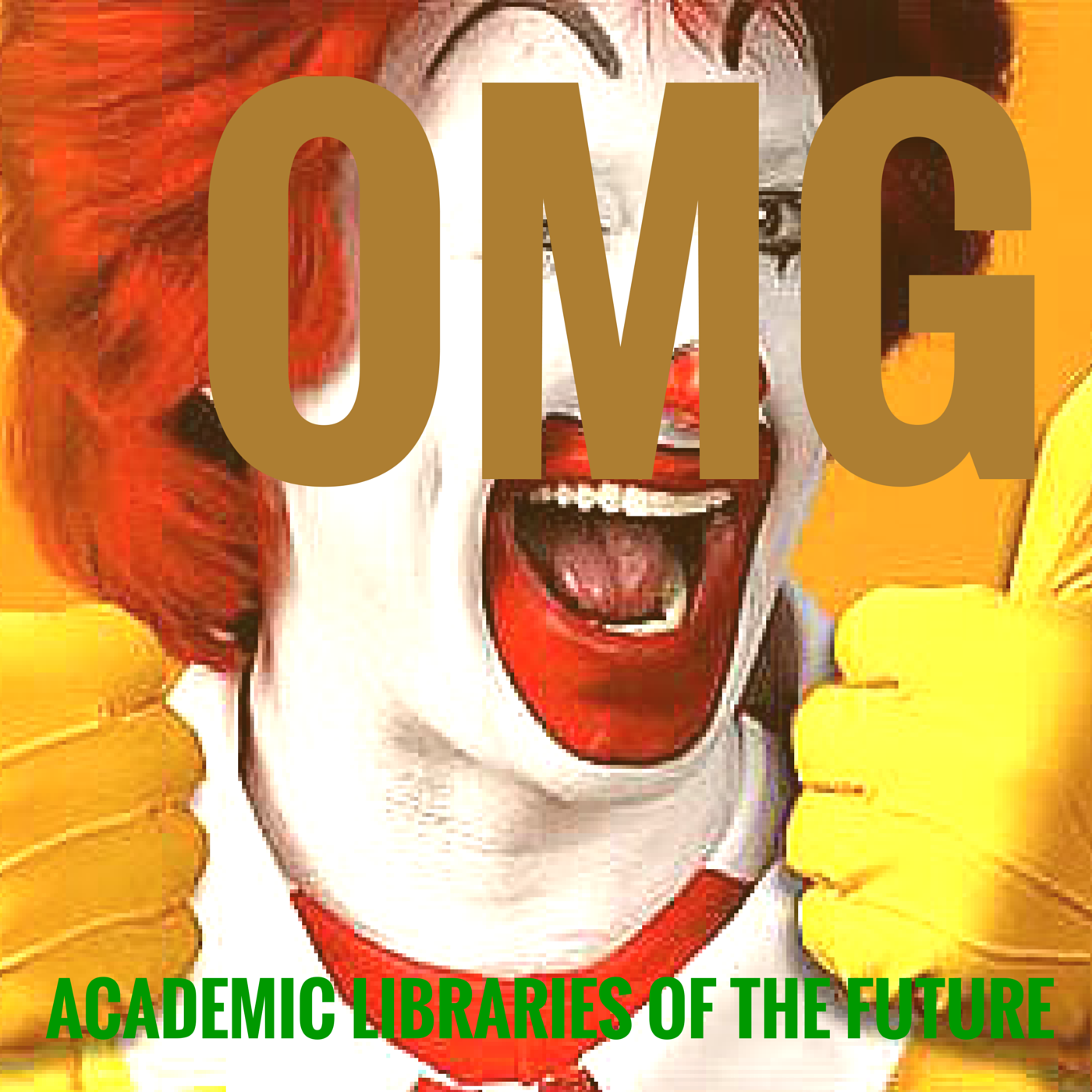 I've been an academic librarian for almost eight years now: how time flies.  One of my favourite writers since I was a student has been Brian Quinn, whose research focuses on the psychosocial aspects of libraries.  One of my first posts featured Quinn's article on librarians as dramaturgists.   Quinn's writing is often fresh and insightful, focusing on different angles and perspectives of librarianship.

In 2000, he put forth the idea that just as society is becoming increasingly "McDonaldized," so is higher education and by extension, academic libraries.  The argument is that we live in an age of mass higher education, in which many students attend college because they see a college education as a means to a more lucrative career, not because they love learning.   Colleges and universities are under pressure from the public and governments to "control costs and maximize efficiency."  I can feel this often in my own line of work, too.

Efficiency is the systematic elimination of unnecessary time or effort in the pursuit of an objective.


The fast-food concept of quick service may have had the effect of raising the expectations of library users. Users seem less content with waiting in line for reference assistance and appear less willing to tolerate delays. Some libraries have responded by giving reference staff pagers so they can be “beeped” if a line forms at the service desk. The use of pagers is another example of how services in academic libraries have become efficiently rationalized.

Calculability is another key characteristic of McDonaldization. Ritzer defined the term calculability as the tendency to measure quality in terms of quantity.

McDonaldization and Predictability
Another key aspect of the rationalization process that is central to McDonaldization is predictability. A rational society is one in which people know what to expect - McDonald's menu is predictable and the food is consistently mediocre no matter which outlet is visited.  A world of McDonald’s is a significantly bland world in which surprise and delight are largely absent.


The collection development process has become more and more standardized, resulting in collection content varying less from one library or type of library to another. . . Many academic libraries use the same vendors, and although particular subject profiles may vary somewhat, the differences often depend more on a particular library’s depth of collecting than on the books themselves.

Academic librarians are typically subject to an elaborate, formalized system of bureaucratic accountability that serves as a form of control. Each librarian’s performance is carefully documented by various means, such as systematized monthly reports to supervisors, annual or semiannual evaluations recorded on standardized forms that must be signed by both librarian and supervisor, less frequent, but periodic, review by promotion and tenure committees, and, more recently, posttenure review committees.

So what's a helpless librarian to do in the midst of this scientific Taylor-style Fordist machinery?   Quinn suggests one remedy to counter the alarming trend is to hire un-McDonaldized librarians which would enable an un-McDonaldized culture.  Fifteen years later, Canadian librarian Karen Nicholson furthers the argument, citing that McDonaldization of academic libraries reflects the growing influence of corporate aims and values in the public sector under the neoliberal philosophy of New Public Management (NPM) -- think competition, profitability, risk, value for money, and entrepreneurship -- increasingly buzzwords in our daily lives.  They've seeped into academic librarianship.

Under this system, society is producing "new kinds of workers"—highly flexible, empowered “portfolios” of skills and experiences ready to sacrifice in lean times, enabled through an indoctrinating culture through the use of core values, vision statements, and futurist leaders.

The American Library Association’s work in defining and promoting “core values” and developing leaders through programs such as Emerging Leaders, a self-propagating initiative that ultimately serves the needs of the ALA itself by “put[ing] participants on the fast track to ALA committee volunteerism,” exemplifies the influence of the new capitalism within the profession of librarianship.

The number of for-profit universities is on the rise, and higher education, in partnership with the private sector, continues to pursue the “expansive markets” of distance learning and e-commerce, as seen by the ubiquity of learning management systems and recent MOOCs phenomena.  This is scary stuff: I'm even taking a sabbatical to figure this all out, too.

So we end with the question that we began with: what are we to do?  I certainly don't have an answer as I am still in the thick of this myself.  Nicholson offers wise words of advice: as a profession, perhaps we need to consider why we do things instead of measuring what we do.  That's a great start:  A journey of thousand miles begins with a single step, as the saying goes.
Posted by Allan at 1:57 AM No comments: