The Cyberport of the Future? 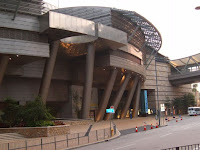 The Web 3.0 craze has already hit the shores of Hong Kong. Although Cyberport was meant to be Hong Kong’s version of Silicon Valley, it has a reputation for being a ghost town. The 95,000 square meters of office space on the west side of Hong Kong Island is a 15.8 billion Hong Kong dollar (US$2 billion) government-owned project criticized by some as being an unsustainable venture.

In a first of its kind Web 3.0 conference took place at Cyberport. As the organizers put it,


in the world of Web 3.0, the Internet should know I won’t be able to watch my favorite TV show. It should automatically record it and book a time slot for me to catch up on this show. This is an example of how the Internet and Web will become smarter. What is an example of Web 3.0 with today’s technology? Earlier this year, we transmitted live and in 3D the World Cup from South Africa to cinemas in Hong Kong with the help of the Internet.

In essence, Cyberport organised Web 3.0 Asia as part of its commitment to establishing itself as a leading information communications technology (ICT) hub of the Asia, region, pushing Hong Kong's creative digital enterprises and start-ups to prepare for the next version of the web.  What struck me was the depth of speakers for the programme, including: Simone Brunozzi, Technology Evangelist at Amazon Web Services; Jon Leland, President and Creative Director, ComBridges.com; and Kaiser Kuo, Director, International Communications of Chinese search enginge, Baidu.

With this conference, it's becoming clear that the next generation of the web will not be limited in geography, but will be a multiversity of ideas and concepts.
Posted by Allan at 9:10 AM No comments: