Is it Google? Or Is it Information Imperialism? 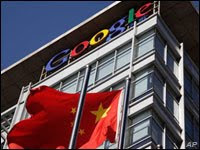 Google's threat to withdraw from China over censorship and cyberspying is a sign of a growing willingness among foreign companies and governments to overturn the conventional wisdom that has defined decades of engagement by the West: that China is so big that it must be accommodated. Or is it simply Western hegemony? Or is it "information imperialism?"

In a recent posting from the Google Blog, Google has announced that it will be adopting a new strategy in China after facing cyber-attacks in which Gmail accounts were hacked into. In mid-December, it had detected a highly sophisticated and targeted attack on our corporate infrastructure originating from China that resulted in the theft of intellectual property from Google. Google would have an easier time quitting China than other companies. Although its business there has been growing, it is estimated to be only a few percentage points of its total revenues. That's a sharp contrast to companies like General Motors Corp., for which China is a crucial market.

What's interesting is that the US government has taken a stance in this growing situation, turning it instantly into a political issue, as Secretary of State Hillary Clinton recently pointed out China as among a number of countries where there has been “a spike in threats to the free flow of information” over the past year. She also named , , , , and Vietnam. In response China called the US of practicing "information imperialism." Viewed from this angle, information is no different than economic and cultural imperialism. Looking at it in this light, Google's strategy might have both political and business implications.

Let's take a look at the the Global Search Report. The report indicates that even as far back as 2007, Google's reach into the web has not been as extensive as we think it might be. Not only did Google have only 21.7% of the market share compared to Baidu's 55% in China, it had only 24.7% compared to Seznam's 65.5% in the Czech Republic. Google didn't even rank top 3 in South Korea (Naver is number 1, with 72.7% of the market share). If we look at Google as a multinational corporation, perhaps its strategy isn't one of intellectual freedom, but one of consolidating market share. As it has no dominance in certain regions, why would it want to move into China in the first place? English isn't everything you know.
Posted by Allan at 9:44 PM No comments:

Libraries of the World - One Google Streetview At A Time

Launched in May 2007 to allow its users to explore the world through images, Google Maps' Street Views' coverage was limited to just five U.S. cities. When Street View first launched, the platform used to capture images was a van. Since 2007, Street View has expanded to include cities, streets, national parks and even some biking trails throughout the world. (And it's still capturing streets as we're talking). Currently, Street View is available for almost a dozen countries around the world in North America, Europe and the Asia-Pacific region.
Interestingly, scaling the project to this level required more lightweight and high-quality technology. Not only was the van replaced by a car, Google had to use different vehicles in different regions around the world to collect tens of millions of images. (Just think of those small alleys in London or Barcelona).
For the upcoming months, we will be travelling together throughout the world, starting in North America, to some of the most innovative and interesting libraries of the world. How are we going to do that? Google Maps. Our first stop? One of the largest libraries in the United States offering patrons access to millions of books, periodicals, and CDs, the New York Public Library also offers a large number of digitized collections that include images, prints and photographs. Interestingly, NYPL was one of the first to collaborate with Google to create a selection of online digital books as part of the Google Books Online Project. Not only is the library is also highly tech savvy with an active RSS feed as well as podcasts on iTunes U, patrons can download ebooks, video and audio directly from the website or video storybooks, video on demand as well as webcasts.
I like travelling.
Posted by Allan at 12:50 PM No comments:

Steve Jobs, Computers, Technology -- And How to Present Them


Steve Jobs will forever be one of the icons of the twentieth and twenty-first centuries. He's helped shape not only technological and business landscape, but the cultural agenda as well. His pitching of the PC vs. Mac debate has split the world into two camps. As one likes to describe him, Jobs doesn't just sell computers; he sells an experience. A new book which has just come out is worth a read. The Presentation Secrets of Steve Jobs argue that Jobs' successful not only because of his visionary appeal of Apple's products, but ultimately his ability to create elegant presentations that are meant to inform, educate, and entertain - his ability to sell himself as a brand. An Apple presentation has all the elements of a great theatrical production—a great script, heroes and villains, stage props, breathtaking visuals, and one moment that makes the price of admission well worth it.

Take a look at Jobs' presentation of the 2001 iPod, long before it gained the foothold of our musical and cultural lexicon - Jobs doesn't just deliver, he performs. His words dances across the stage like an actor's - and we all know he's having fun doing it. Carmine Gallo's book is an addictive read after the lull of the holidays. Perhaps it is as important for librarians and information professionals as any, as presentations form the crux of their work. Steve Jobs' skills at articulating himself is a defiant reminder to how we can all work on effectively communicating to our audiences what we really need to say.

Scene 2 - Answer the One Question That Matters Most

Scene 9 - Dress Up Your Numbers

Scene 12 - Stage Your Presentation With Props

Intermission 2 - Schiller Learns From the Best

Email ThisBlogThis!Share to TwitterShare to FacebookShare to Pinterest
Newer Posts Older Posts Home
Subscribe to: Posts (Atom)
Allan Cho is a librarian, editor, author, writer, and EDI facilitator. Much of his writing covers librarianship, publishing, critical race theory, and Asian Canadian/American literature. He volunteers his time supporting racialized and BIPOC librarians, publishers, and writers as a consultant and mentoring new graduates. If you have questions or would like to get in touch, please leave an email.