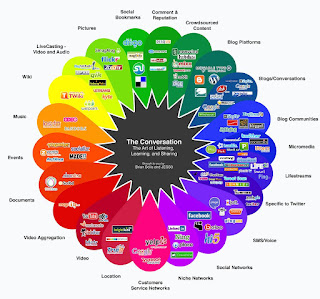 Brian Solis, Principal of FutureWorks, an innovative Public Relations and New Media agency in Silicon Valley, along with Jesse Thomas of JESS3, has created a new graphic that helps chart online conversations between the people that populate communities as well as the networks that connect the Social Web. The Conversation Prism is free to use and share. It's their contribution to a new era of media education and literacy.

The conversation map is a live representation of Social Media evolves as services and conversation channels emerge, fuse, and dissipate. As the authors argue philosophically, if a conversation takes place online and you’re not there to hear or see it, did it actually happen? Indeed. Conversations are taking place with or without you, and this map will help all to visualize the potential extent and pervasiveness of the online conversations that can impact and influence your business and brand.

As a communications, service, and information professionals, we should find ourselves at the center of the prism - whether we are observing, listening or participating. Solis and Thomas' visual map is an excellent complement to The Essential Guide to Social Media and the Social Media Manifesto, which will help us all better understand how to listen and in turn, participate in the Web 2.0 world. A new, braver, world.
Posted by Allan at 10:01 PM No comments:

The Christmas gift from Malcolm Gladwell came early this year. And I just bought a copy. His new book, Outlier, is a magnificent read. In Outliers, Gladwell, the ever-curious mind, examines why some people succeed, living remarkably productive and impactful lives, while so many more never reach their potential. Analyzing historical nuances from Asian rice paddies to the birthdates of Canadian junior hockey players, Gladwell forces us to re-examine our cherished belief of the "self-made man," and throws out the long-held notion that "superstars" do not come from nowhere. Although born with innate genius and talent, successful people are invariably the beneficiaries of hidden advantages and extraordinary opportunities and cultural legacies that allow them to learn and work hard and make sense of the world in ways others cannot.


While there are a plethora of intellectual points for discussion, 'practical intelligence' in my opinion, is the new key term to take away from Gladwell's book. PQ is a term that psychology Robert J. Sternberg proposed, when he argued that there are three intelligences in human cognition:

(3) Practical intelligence - the ability that individuals use to find the best fit between themselves and the demands of the environment.

The three intelligences, or as he also calls them three abilities, comprise what Sternberg calls Successful Intelligence: "the integrated set of abilities needed to attain success in life, however an individuals defines it, within his or her sociocultural context." While society tends to have bought into the idea that innate talent, through such test devices as IQ tests, can predict the success of a person, Gladwell re-examines this piece of wisdom, and argues otherwise. This book will be useful for anyone with a curiosity for success. It gives us a better, more complex, inquiry into what fuels success. And it's not just about brains, you know.

Calling all librarians. Reference Extract is coming to you all. Envisioned as a web search engine, like Google, Yahoo and MSN. Reference Extracts will be built for maximum credibility by relying on the expertise and credibility judgments of librarians from around the globe. However, unlike other search engines, users enter a search term and get results weighted towards sites most often referred to by librarians at institutions such as the Library of Congress, the University of Washington, the State of Maryland, and over 1,400 libraries worldwide. The Reference Extract project is being developed by the Online Computer Library Center and the information schools of Syracuse University and the University of Washington. With a $100,000 grant from the John D. and Catherine T. MacArthur Foundation, Reference Extract strives to build the foundation necessary to implement it as a large-scale, general user service.

My thoughts? It's not unlike similar attempts to outdo Google. Have you heard of Refseek? RefSeek does not claim to offer more results than Google; instead, it strips any results not related to science, research and academia. It’s different from Google Scholar in that it indexes documents that includes web pages, books, encyclopedias, journals, and newspapers. It also has more results from .edu and .org sites as well as various online encyclopedias such as Wikipedia and Answers.com. With Refseek and Reference Extract, are we having much of the same, except in a different shape and size? We'll see...
Posted by Allan at 12:29 PM No comments:

My Secret Life on the McJob

If there is one book you need to read for this Christmas holidays, make it My Secret Life on the McJob. I just couldn't put it down after coming across it up from my local library. My first position out of university was for a big box retail bookstore, and it was tough. (It brings back haunting memories that resonates today). Retail is tough. And professor Jerry Newman of University at Buffalo's State University of New York explains this in pristine detail as he worked undercover in the lowest rung minimum wage labour world of fast food restaurants to reveal insightful, and at times, disturbing practices in retail culture.

In my opinion, My Secret Life on the McJob is a paradigmatic shift in the field work analysis of organizations. Too often Library and Information Science educators are narrowly confined to questionnaires and quantitative analyses and equally narrowly churning out generic, boring, and unusable data about user statistics. Instead of viewing from the top-down, Newman does the exact opposite. Jerry Newman turns a stunted methodology of interviewing and statistical analysis on its head by actually doing a personal sacrifice (physical risk included) through experiencing the problems and flaws of organization behaviour and working as a covert fast food worker. What does he discover? The inefficiencies of retail, fast food, and traditional hierarchical management techniques passed down by the Ford Assembly Line era are not working in our globalized, mobile workforce era.

What Newman forces us to review about our workplace is that people are important. It's about the people. Good ideas come from the front lines. This applies not only to the retail world, but businesses of any kind, and especially libraries.
Posted by Allan at 11:26 PM No comments:

World Cafés are an emerging phenomenon. It's a conversational process based on an innovative yet simple methodology for hosting conversations about questions that matter. These conversations link and build on each other as people move between groups, cross-pollinate ideas, and discover new insights into the questions or issues that are most important in their life, work, or community. As a process, the World Café nurtures the collective intelligence of any group, and in doing so increases people's capacity for effective action in pursuit of common or similar aims.

The World Café refers to a living network of conversations that is continually co-evolving as we explore questions that matter with our family, friends, colleagues, and community. In helping us notice these invisible webs of dialogue and personal relationships that enable us to learn, create shared purpose, and shape life-affirming futures together, the metaphor of the "World as Café" is a growing global community of people, groups, organizations, and networks using World Café principles and processes to harness wisdom of the crowds.

As information professionals and librarians, we need to take notice of such trends and see how it can be applied in our own work spaces. Many knowledge managers today are introducing what they call knowledge commons in which employees can freely (or not) chat among themselves as they commute to and fro during the day. As a result, this space is turned into a knowledge hub where gossip, conversation, and useful ideas normally trapped within the confines of cubicle and office walls are broken free and released into the work place, making for a growth of a healthy work culture and environment.

In a way, this is done everyday in the form of Web 2.0 technologies through social network and instant messaging programs such as Facebook, Twitter, instant messaging, and blogs. Employers, especially knowledge workers, must find a way to integrate this into their working spaces. In my opinion, libraries and information centres need to look towards the knowledge cafes model. Libraries must turn towards becoming information cafes and less as gatekeepers of information. 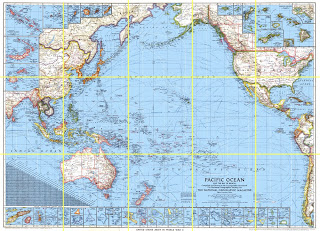 In Vancouver, there are two publications which have very divergent approaches to not only Asian Canadian issues, but also the use of media and the web. Ricepaper Magazine, established in 1994, as a forum for up and coming Asian writers and artists in Canada, limits its definition of "Asian" to the Pacific Asian Rim ethnic groups Chinese, Japanese, and Korean. Focusing mainly on writers of these ethnic origins, Ricepaper depends mainly on the quarterly print publication as its main point of distribution and have a very static website with limited updates.

Contrast that with Schema Magazine. Schema Magazine strives to reflect the most culturally mobile and diverse generation of Canadians, the generation it coins cultural navigators. We showcase their unique sensibilities, interests and their pursuit of ethnic cool. As Schema's focus on the Vancouver Asian Film Festival shows, the focus of "Asian" is broad and widely interpretable. Schema also uses Web 2.0 technologies as its main channel of communication. Not only does it use a content management system for its webpage, it also has a Youtube channel of Schema's interviews.

The two rival Asian Canadian organization offer an insightful examination into the changing landscape of media and publishing. Staff-wise, both are similar - yet, when it comes to coverage and reach of audience, Web 2.0 simply wins out.
Posted by Allan at 2:56 PM No comments: