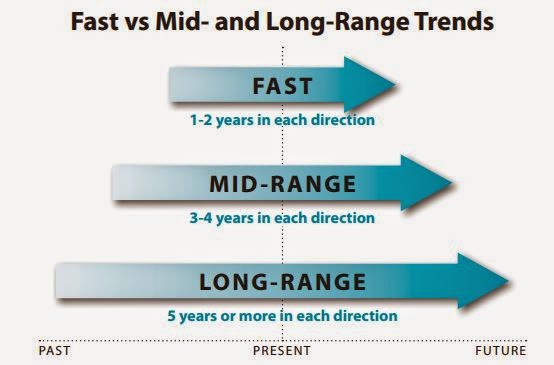 It’s that time of year when the NMC Horizon Project, a 12-year effort established in 2002, unleashes what it identifies and describes as the emerging technologies likeliest to have the largest impact over the coming five years in every sector of education around the globe.

As I’ve written in previous postings about Horizon Report, it’s always like Christmas Eve anticipation. This year is even more exciting and interesting as this version of the NMC Horizon Report: 2014 Library Edition examines six key emerging technology trends for their impact on academic and research libraries worldwide.

Time-to-Adoption Horizon: One Year or Less

Electronic Publishing
If the first revolution in electronic publishing was making publishing platforms accessible to anyone, the next phase is now to link these platforms together in producing new combinations and new types of content. New concepts such as responsive design and open access will allow that content to be archived as well as ported to any device, making it easier for libraries to publish resources that assist and reach people outside of the physical buildings.

Mobile Apps
For several years now, a revolution has been taking place in software development that parallels similar shifts in the music, publishing, and retail industries. Mass market is giving way to niche market, and with it, the era of highly priced large suites of integrated software has shifted to a new view of what software should be.
Time-to-Adoption Horizon: Two to Three Years

Bibliometrics and Citation Technologies
Viewed as a set of mathematical and statistical methods to quantitatively analyze citations and content of academic literature, the technology has advanced rapidly in the age of computers as new algorithms are being developed to better gauge an author or journal’s impact in the field, and help researchers efficiently filter through research databases or select the most appropriate journal for publication.
Open Content
Open content uses open licensing schemes to encourage not only the sharing of information, but the sharing of pedagogies and experiences as well. Part of the appeal of open content is that it is a response to both the rising costs of traditionally published resources and the lack of educational resources in some regions.

The Internet of Things
The Internet of Things (IoT) is a network of connected objects that link the physical world with the world of information through the web. Embedded chips, sensors, or tiny processors attached to an object allow helpful information about the object, such as cost, age, temperature, color, pressure, or humidity to be transmitted over the Internet.
Semantic Web and Linked Data
Tim Berners-Lee originally envisioned the semantic web as a natural evolution of the web. His idea is that eventually the semantic web might be able to help people solve very difficult problems by presenting connections between seemingly unrelated concepts, individuals, events, or things — connections that it would take many people many years to perceive, but that could become obvious through the kinds of associations made possible when the semantics of the data are exposed.
So there you go - the Horizon Report has been accurate on a number of fronts since it was first released.
Posted by Allan at 9:59 PM No comments:

How to Be a Quitter and Still Be a Success


I recently came across Jon Acuff's Quitter. Jon Acuff is a New York Times Bestselling author of four books including his most recent, Start: Punch Fear in the Face, Escape Average and Do Work that Matters

.  For 16 years he’s helped some of the biggest brands in the world tell their story, including The Home Depot, Bose, Staples, and have spoken at conferences, colleges, companies and even churches.  Probably better known as the humorist who wrote Stuff Christians Like

, Acuff has a witty and sharp intellect for being able to synthesize complex ideas into a highly engaging and fun read.  In my recent foray into Quitter, I realized that I stumbled across another great read - one that situates the current wave of literature around self-improvement and self-publishing guides.

Fame is a Burden - Don't be a victim of your own success - Many who go from anonymity to overnight success experience pressure to constantly keep up.  The consequences are often an afterthought when one begins the long road from creating something from scratch and watch it grow to prominence.  But the road to fame has its drawbacks, including the loss of privacy, freedom, and ultimately the chance to be able to innovate and freely fail.  Anonymity is a luxury.  Many stars yearn for the opportunity to test new ideas and experiment without consequences.  But here is the paradox: the greater the fame, the less space there is for risk whereas obscurity's greatest trade-off is the ability to try anything and do anything without much repercussions.  Fame does have its drawbacks doesn't it?

Do Not Burn Out - It's easy after a while to forget about the people around you.  The countless hours of hard work that leads to success oftentimes comes at a price - and that is usually those closest around us.  There will inevitably be a trade-off; sadly, success comes at a zero-sum game.  To achieve success in almost anything, one must dedicate time and energy for a craft - yet, this comes at a price.  Family and friends should be foremost, according to Acuff, as they are a support network in life's ecology.  We need to nurture these relationships and not forget about the bigger picture in life.  It's not all about the money.

Give for Free - Just as important to create is the necessity to give back.  Acuff encourages us that we need to share what we create with the world and give back.  Like a karmic cycle, this giving will reward ourselves further into the future.  Many have written about this concept of giving back, including self-help gurus from Robert Kawasaki to billionaires such as Richard Branson.  There's a reason it's a common theme: it works!  So will you do it?
Posted by Allan at 3:35 PM No comments: