Just as we had Google and Web 2.0 nearly figured out, the Semantic Web is just around the corner. Introducing hakia, one of the first truly Semantic Web search engines. As we had argued, the Semantic Web is a digital catalogue, and many of the key components is the understanding of ontologies and taxonomies. Built on Semantic Web technologies, hakia is a new "meaning-based" (semantic) search engine with the purpose of improving search relevancy and interactivity -- the potential benefits for end users are search efficiency, richness of information, and saving time. Here are the elements which makes hakia. Will this hakia team be the next Brin and Page? Why don't you try it?

(1) Ontological Semantics (OntoSem) - A formal and comprehensive linguistic theory of meaning in natural language. As such, it bears significantly on philosophy of language, mathematical logic, and cognitive science

(3) SemanticRank algorithm - Deploys a collection of methods to score and rank paragraphs that are retrieved from the QDEX system for a given query. The process includes query analysis, best sentence analysis, and other pertinent operations

(4) Dialogue - In order establish a human-like dialogue with the user, the dialogue algorithm's goal is to convert the search engine's role into a computerized assistant with advanced communication skills while utilizing the largest amount of information resources in the world.

(5) Search mission - Google mission was to organize the world's information and make it universally accessible and useful. hakia's mission is to search for better search.
Posted by Allan at 8:31 PM 1 comment:

A Defintion of the Semantic Web 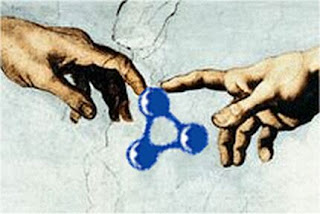 Parker, Nitse, and Flowers' Libraries as Knowledge Management Centers makes a good point about special libraries. Libraries need to be at the forefront of technology, or else they'll be an endangered species. As libraries struggle with the fallout of the digital age, they must find a creative way to remain relevant to the twenty first century user who has the ability and means of finding vast amounts of information without even setting foot in a library. The authors go on to suggest that an understanding of the Semantic Web is necessary for those working in libraries. An excellent definition of the Semantic Web is made -- one of the best I've seen so far:

Today's web pages are designed for human use, and human interpretation is required to understand the content. Because the content is not machine-interpretable, any type of automation is difficult. The Semantic Web augments today's web to eliminate the need for human reasoning in determining the meaning of web-based data. The Semantic Web is based on the concept that documents can be annotated in such a way that their semantic content will be optimally accessible and comprehensible to automated software agents and other computerized tools that function without human guidance. Thus, the Semantic Web might have a more significant impact in integrating resources that are not in a traditional catalog system than in changing bibliographic databases.

Three Perspectives of the Semantic Web 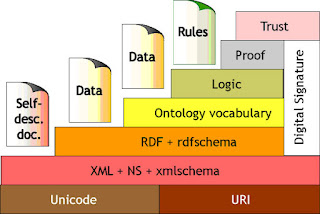 Catherine Marshall and Frank Shipman has interesting insight in Which Semantic Web? In it, they argue that the plethora of interpretations of the Semantic Web can be traced back to three different perspectives. Here they are:

(1) A Universal Library - Readily accessed and used by humans in a variety of information use and contexts. This perspective arose as a reaction to the disorder of the Web, which was not ordered in categorization until search engines came along. Metadata, cataloguing, and schemas were seen as the answer.

(2) Computational Agents - Completing sophisticated activities on behalf of their human counterparts. Tim Berners-Lee envisioned an infrastructure for knowledge acquisition, representation, and utilization across diverse use contexts. This global knowledge base wil be used by personal agents to collect and reason about information, assisting people with tasks common to everyday life.

(3) Federated Data and Knowledge Base - In this vision, federated components are developed with some knowledge of another or at least with a shared anticipation of the type of applications that will use the data. In essence, this Web encompasses languages used for syntactically sharing data rather than having to write specialized converters for each pair of languages.
Posted by Allan at 9:12 PM No comments: 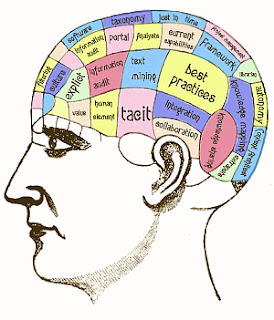 Michael Koenig and T. Kanti Srikantaiah proffer the idea that Knowledge Management is in its third phase. Here are the different stages:

Stage 1 - Internet of Intellectual Capital - this initial stage of KM was driven primarily by IT. In this stage, organizations realized that their stock in trade was information and knowledge -- yet the left hand rarely knew what the right hand did. When the Internet emerged, KM was about how to deploy the new technology to accomplish those goals.

Stage 2 - Human & Cultural dimensions - the hallmark phrase is communities of practice. KM during this stage was about knowledge creation as well as knowledge sharing and communication.

Stage 3 - Content & Retrievability - consists of structuring content and assigning descriptors (index terms). In content management and taxonomies, KM is about arrangement description, and structure of that content. Interestingly, taxonomies are perceived by the KM community as emanating from natural scientists, when in fact they are the domain of librarians and information scientists. To take this one step further, The Semantic Web is also built on taxonomies and ontologies. Anyone see a trend? Perhaps a convergence?
Posted by Allan at 7:21 PM No comments:

When is an Apple, an Apple? 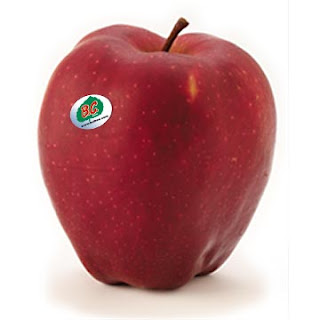 In Linked: How Everything Is Connected to Everything Else and What It Means, Albert-Laszlo Barabasi proposes that the ultimate search engine is one that can tap into the input of every person here on Earth. Although none such search engines existed, he argues that Google is the closest we have to a “worldly” search engine because of its PageRank algorithm.

I argue that we can go one step further because with the advent of Web 2.0, social search is actually the closest that we have to gathering input from all of the world’s users. How? Why? Let me explain with an analogy.

Del.icio.us is a social bookmarking web service. But it can be a powerful search tool if used properly; essentially, it taps into the social preferences of other users. Same goes for Youtube: it’s a video sharing website, but what’s to say that it can’t be used for searching videos for relevant topics, what’s to say that you can’t search related videos based on videos bookmarked by others? Social search is not based on program; it is mindset, a metaphorical sweet fruit, if you will.

In many ways, social searching is not unlike what librarians did (and still do) in the print-based world where an elegant craft of creativity and perserverence was required to find the right materials and putting them into the hands of the patron; the only difference is that the search has become digital. 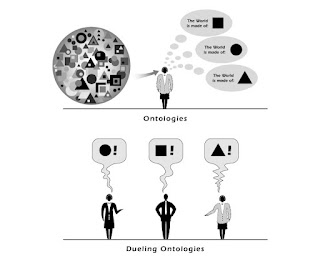 In 2002 -- two years before Tim O'Reilly's famous coining of the term, "Web 2.0," Katherine Adams of the Los Angeles Public Library had already argued that librarians will be an essential piece to the Semantic Web equation. In The Semantic Web: Differentiating Between Taxonomies and Ontologies, Adams makes a few strong arguments that is strikingly ahead of their time. Long before wikis, blogs, and RSS feeds had come to prominence, (5 years ago!) Adams had the foresight to point out the importance of librarians in reply to Berners-Lee et al's vision. Here are Adams main points, all of which I find fascinating based on pre-Web 2.0 knowledge:

(1) Taxonomies: An Important Part of the Semantic Web - The new Web entails adding an extra layer of infrastructure to the current HTML Web - metadata in the form of vocabularies and the relationships that exist between selected terms will make this possible for machines to understand conceptual relationships as humans do.

(2) Defining Ontologies and Taxonomies - Ontologies and taxonomies are used synonymously -- Computer Scientists refer to hierarchies of structured vocabularies as "ontology" while librarians call them "taxonomy."

(3) Standardized Language and Conceptual Relationships - Both taxonomies and ontologies consist of a structured vocabulary that identifies a single key term to represent a concept that could be described using several words.

(4) Different Points of Emphasis - Computer Science is concerned with how software and associated machines interact with ontologies; librarians are concerned with how patrons retrieve information with the aid of taxonomies. However, they're essential different sides of the same coin.

(5) Topic Maps As New Web Infrastructure - Topic maps will ultimately point the way to the next stage of the Web's development. They represent a new international standard (ISO 13250). In fact, even the OCLC is looking to topic maps in its Dublin Core Initiative to organize the Web by subject.
Posted by Allan at 9:04 PM 4 comments: 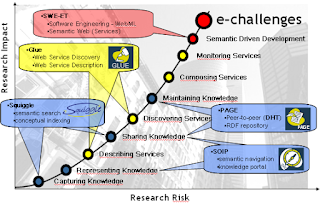 My colleague Dean Giustini and I have collaborated on an article, The Semantic Web as a large, searchable catalogue: a librarian’s perspective. In it, we argue that librarians will play a prominent role in Web 3.0. The current Web is disjointed and disorganized, and searching is much like looking for a needle in the haystack.

It's not unlike the library before Melvil Dewey introduced the idea of organizing and cataloguing books in a classification system. In many ways, we see the parallels here 130 years later. It's not surprising at all to see the OCLC at the forefront in developing Semantic Web technologies. Many of the same techniques of bibliographic control apply to the possibilities of the Semantic Web. It was the computer scientists and computer engineers who had created Web 1.0 and 2.0, but it will ultimately be individuals from library science and information science who will play a prominent role in the evolution of organizing the messiness into a coherent whole for users. Are we saying that Web 2.0 is irrelevant? Of course not. Web 2.0 is an intermediary stage. Folksonomies, social tagging, wikis, blogs, podcasts, mashups, etc -- all of these things are essential basic building blocks to the Semantic Web.
Posted by Allan at 7:03 PM 1 comment: