Gesture-based computing will soon be a critical technology and has been profiled as an emerging trend in the Horizon Report 2012.   With gesture-based computing, just your hands and fingers are sufficient in directly interact with the screen - replacing mouse and keyboards altogether.

As far back as 2008, the Bavarian State Library had already installed purely gesture-controlled presentation system that personalizes virtual experience of digitized manuscripts, blending in history with cutting edge technology.   The BSB Explorer is a selection of 3D digital copies of the most valuable works of the Bavarian State Library, consisting of a large display and a sensor control unit - allowing for a purely gesture-based, completely contactless manipulation of the 3D animated digital copies on the display. Without the mouse or the touch screen as intermediate elements, the digitized 3D books can be paged through, turned and zoomed by mere movements of the hand.

Imagine being able to scan through collections of historical works through the swipe of your hands.  Imagine re-sizing the image through the waving of your fingers.   Observer how libraries, museums, and galleries are increasingly sharing their digital experiences.  Is this a sign of the times?   Observe how in this video gesture-based technology is used.
Posted by Allan at 8:55 PM 2 comments: 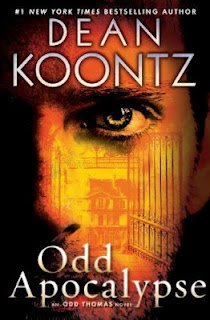 As a librarian, technology plays a critical role in my work.  Whether it is social media, mobiles, or cloud computing, I need to be aware of what's new, what's going on, especially the tools that students and patrons are using next.    The book publishing industry is making a leap of faith into the latest of cutting-edge technology, using augmented reality as a way to enhance its stories beyond the physical page.   Layar has already been working with its European magazine counterparts in blending in digital 2D objects to the physical pages to produce a sensational experience.

Dean Koontz is one of my favourite authors, and his Odd Thomas Series is a well-received series of books about Thomas, twenty-year-old man who is able to see the spirits of the dead.  Bantam books is one of the first to use augmented reality is salvaging a lagging book industry.  What does this mean for libraries?  Could this mean the end of bar codes?   Could this mean that librarians will be able to use image recognition on their mobiles to conduct online reference?  Let's wait some more.  In the meantime, try out Odd Apocalypse -- you can see it come to life using your mobile phone or computer webcam.   Try it out.
_____________________________________

For iPhone and iPad users:

For webcam users:
Posted by Allan at 9:13 PM No comments: