An American Professor of Clinical Pediatrics at the University of California, San Francisco (UCSF) is potentially drawing the line in the sand with the sugar industry.  Robert Lustig's research focuses on the regulation of energy balance by the central nervous system and childhood obesity.  He's reignited an almost forgotten episode of corporate conspiracy.  Thanks to researchers like Lustig, e-commerce, and the long tail, the John Yudkin's Pure, White and Deadly [free copy here] a book widely denounced at the time of publication, is currently one of the hottest out-of-print works in the world.

Lustig's now ground-breaking lecture called Sugar: the Bitter Truth, which hailed Yudkin’s work as "prophetic" has garnered now more than 4 million hits on YouTube since 2009.  Lustig's emergence in the public eye came from his efforts to establish that fructose can have "serious deleterious effects" on human (especially children's) health if consumed in too large amounts. Hi May 26, 2009 lecture "Sugar: The Bitter Truth" eventually "went viral" with some 4.2 million viewings . In his lecture, Lustig refers to fructose as a "poison" and equates its metabolic effects with those of ethanol(!)

Of course, Lustig did his detective work the old fashioned way: he tracked down the book after a tip from a colleague via an interlibrary loan.   In a prophetic way, Lustig's viral prominence is being credited with triggering the anti-sugar movement, a campaign that calls for sugar to be treated as a toxin, like alcohol and tobacco, and for sugar-laden foods to be taxed, labelled with health warnings and banned for anyone under eighteen.  Lustig is one of a growing number of scientists who are convinced it’s the cause of several chronic and very common illnesses, including heart disease, cancer, Alzheimer’s and diabetes. It is also an addictive that interferes with appetites and creates an irresistible urge to eat.

Instead of treating the findings as a threat, the food industry spun a commercial opportunity. Market research showed there was a great deal of public enthusiasm for "healthy" products and low-fat foods would prove incredibly popular. By the start of the 1970's, supermarket shelves were saturated in low-fat yogurts, spreads, and even desserts and biscuits.  Moreover, a concerted campaign by the food industry and several scientists began to discredit Yudkin’s work. The British Sugar Bureau put out a press release dismissing Yudkin’s claims as "emotional assertions" and the World Sugar Research Organisation described his book as "science fiction."

Yudkin was "uninvited" to international conferences and papers he published discrediting sugar were pulled from publications. Conferences he organized were cancelled at the last minute, after pressure from sponsors, such as Coca-Cola. The British Nutrition Foundation, one of whose sponsors was Tate & Lyle, never invited anyone from Yudkin’s prestigious department to sit on its committees. Queen Elizabeth College refused allow Yudkin to use its research facilities when he retired in 1970 to write Pure, White and Deadly.

The backlash and academic boycott of Yudkin resulted in a domino effect as other scientists, who avoided negative about sugar for fear of being similarly attacked. As a result, the low-fat industry, with its products laden with sugar, boomed.  Yudkin knew a lot more data was needed to support his theories, but never had the chance to continue his research in any meaningful way or support.

Eventually medical science would discover the critical hormones that would explain and connect his theories.  In the 1980's, new discoveries gave new credence to Yudkin’s theories.   As Julia Llewellyn Smith explains,


Researchers found fructose, one of the two main carbohydrates in refined sugar, is primarily metabolized by the liver; while glucose (found in starchy food like bread and potatoes) is metabolized by all cells. This means consuming excessive fructose puts extra strain on the liver, which then converts fructose to fat. This induces a condition known as insulin resistance, or metabolic syndrome, which doctors now generally acknowledge to be the major risk factor for heart disease, diabetes and obesity, as well as a possible factor for many cancers.

Yudkin’s reputation has since been resuscitated and Penguin has recently re-published Pure, White and Deadly. But the damage had been done as obesity rates have skyrocketed compared to when the book was published.   Just as the public had to learn from the dangers of Big Tobacco the painful way, so must the public again have to horribly learn about Big Food, Big Soda and Big Alcohol.  If not for the power of social media and a fortuitous lecture, the movement to uncover a harrowing truth would never have happened. 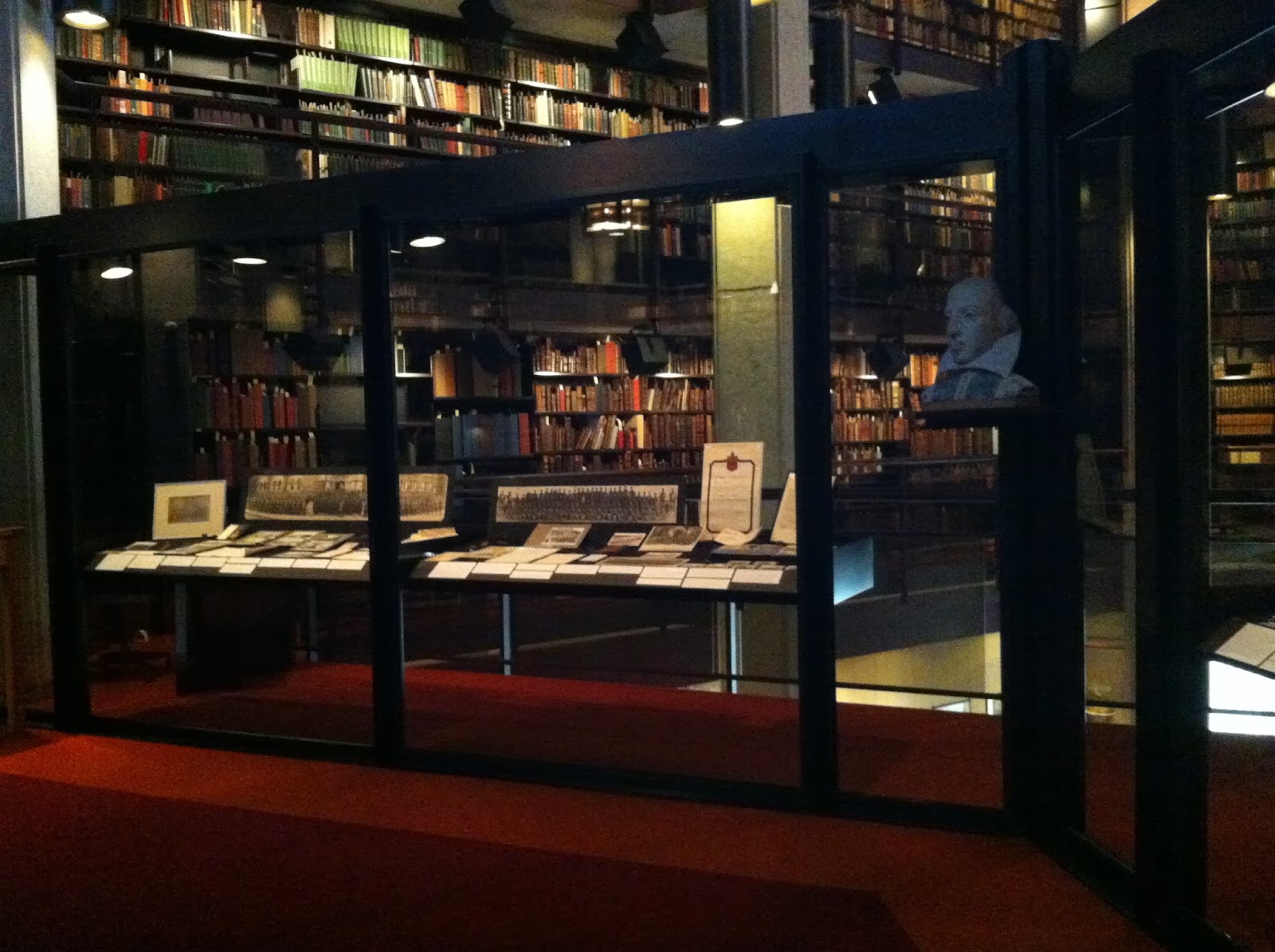 During my trip to the University of T oronto, I had the opportunity to visit the Thomas Fisher Rare Books Library.  As the largest repository of publicly accessible rare books and manuscripts in Canada, the Department of Rare Books and Special Collections and the University Archives at UT campus, however, did not have a permanent home until 1973 when the Thomas Fisher Rare Book library was opened. 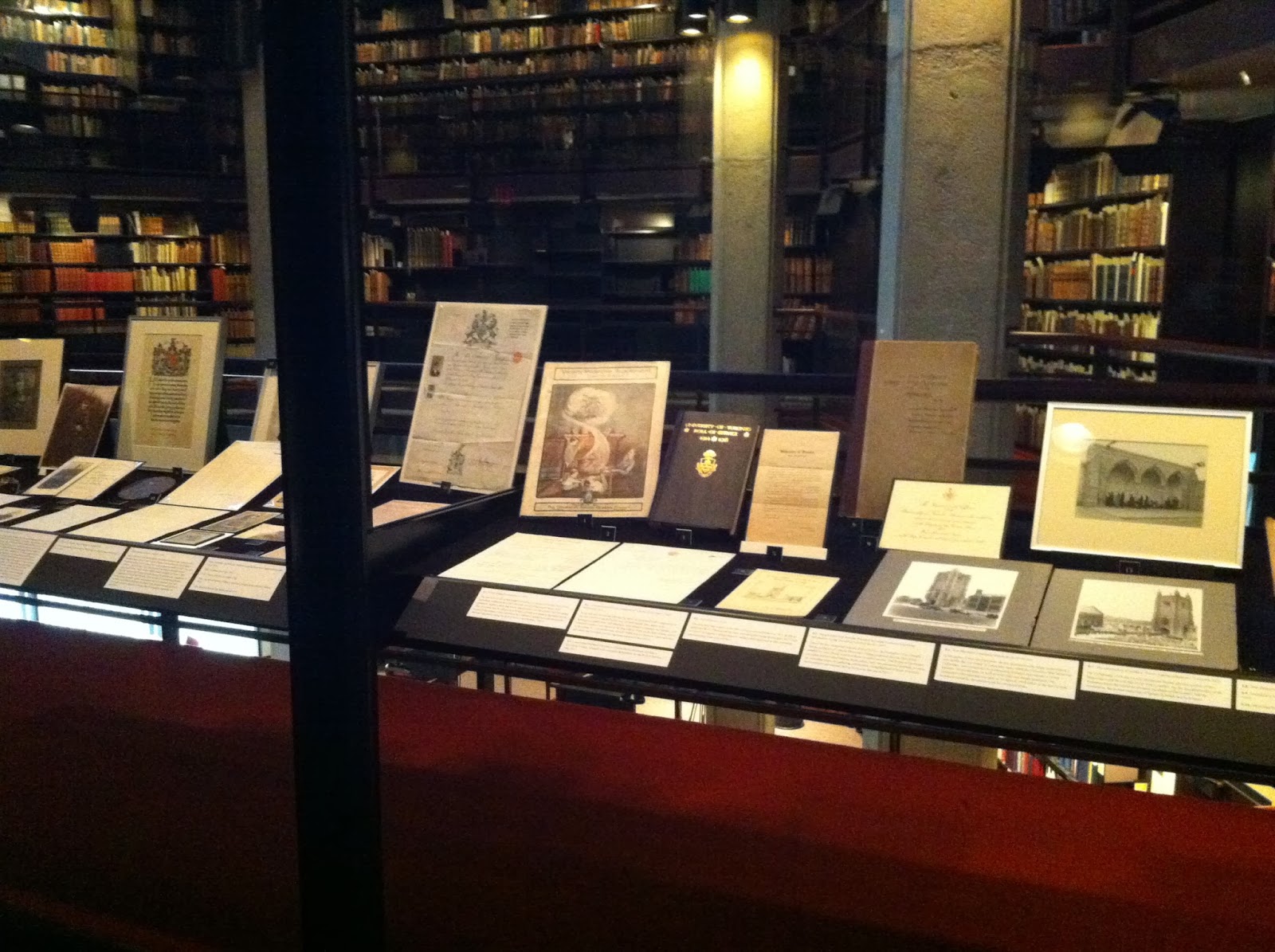 The library is also home to the university archives which, in addition to institutional records, also contains the papers of many important Canadian literary figures including Margaret Atwood and Leonard Cohen. 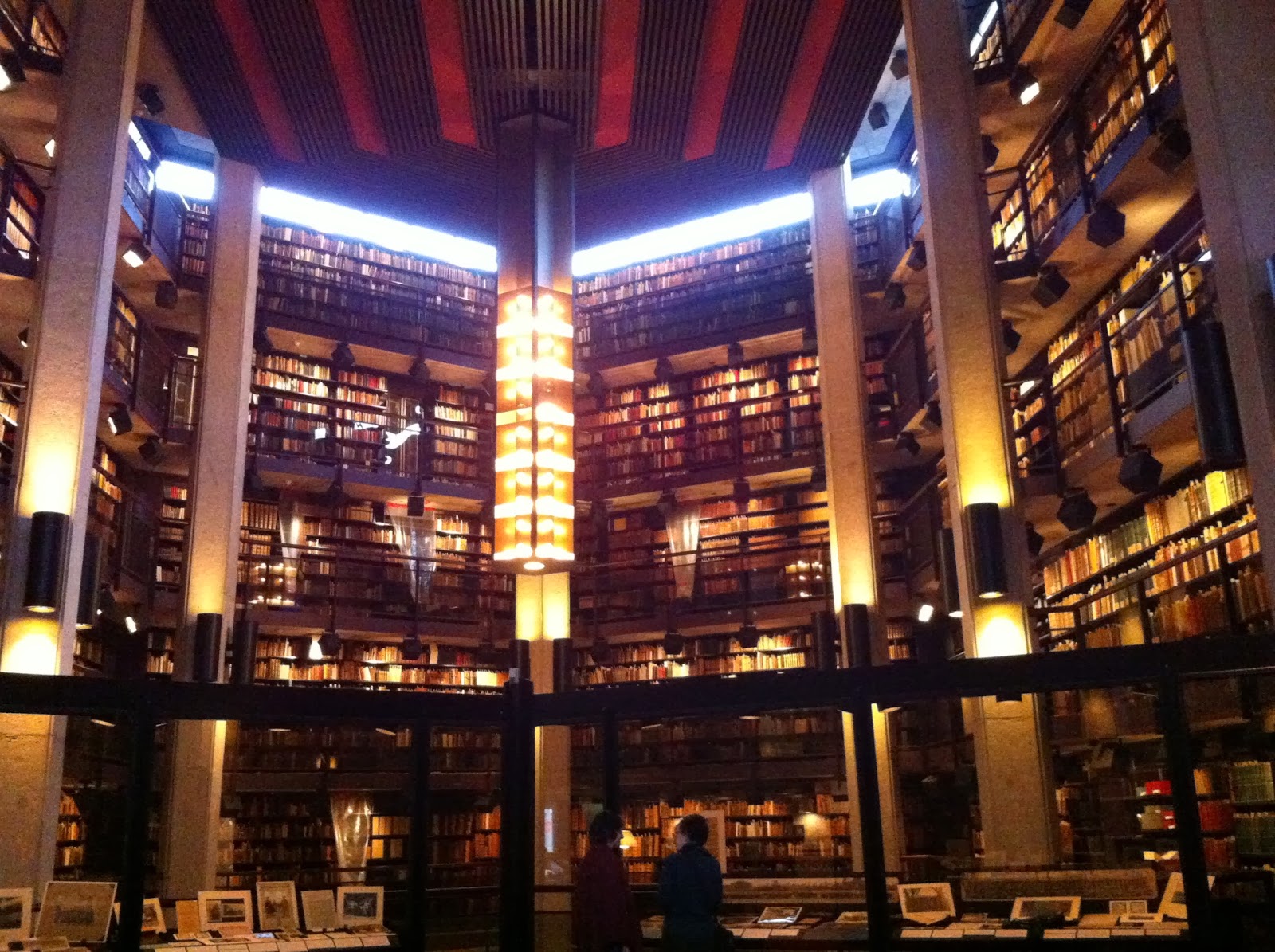 Among the collection's items are the Nuremberg Chronicle (1493), Shakespeare's First Folio (1623), Newton's Principia (1687), and Darwin's proof copy (with annotations) of On the Origin of Species (1859). Other collections include Babylonian cuneiform tablet from Ur (1789 BC), 36 Egyptian papyrus manuscript fragments (245 BC), and Catholicon (1460). 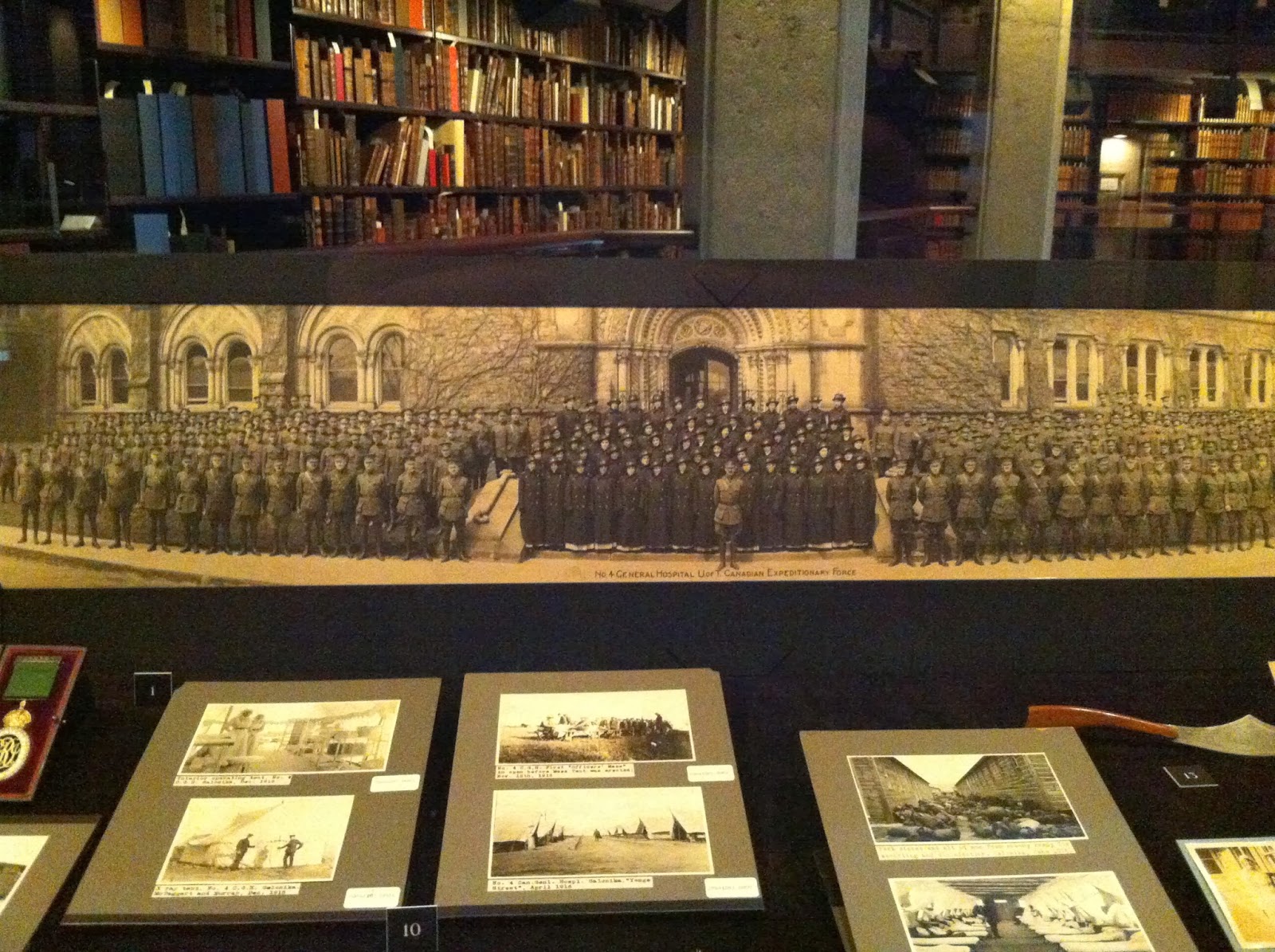 I was very impressed with how the Fisher Library engages its patrons with ongoing exhibitions.  The current exhibition examines Canada during the Great War, 'We Will Do Our Share': The University of Toronto and the Great War, focuseing on how the University prepared for and carried out its duties during the war and on the impact of the war on the University’s faculty, staff, students, its physical plant, its academic and research programmes, and on student and other organizations.  Here are some highlights of the digital collections from the Library.  It's well worth a perusal on your own time - both physical and in digital!