However, the LIS cognitive schools of thought assume universal concepts, and are often devoid of ethnological methodology or cultural comparisons. Unfortunately, this resonates to the library and information professions as users are often painted with the same generalist brush. Multicultural librarianship is often limited to market segmentation and specialized reading lists. What about cultural user behaviours? Cultural information retrieval studies? LIS often does not cross into the realm of cultural studies, despite the fact that there is much to examine.

Larissa Hjorth's The Game of Being Mobile: One Media History of Gaming and Mobile Technologies in Asia-Pacific is an interesting microanalysis of social media behaviourial differences between Korea and Japan. It offers much food for thought for LIS professionals, particularly for those who overgeneralize their user groups and standardize one-size-fits-all attitudes in designing information systems. Hjorth highlights some interesting points:

(1) Asia-Pacific Region - Marked by diverse penetration rates of gaming, mobile and broadband technologies, which are subject to local cultural and socio-economic nuances. One of the dominant modes of socializing the consumption of new technologies is through the role of cute culture (also known as kawaii).

(2) Rise in mobile media - Marked by the rise in particular modes of gaming in these regions. South Korea and Japan represent two opposing directions for gaming - Korea emphasizes MMOGs played on stationary PCs in social spaces while Japan pioneers the mobile (privatized) convergent platforms and devices such as the handhelf PSP2 and Nintendo DS.

(3) Public and Private Spaces - Previous domestic technologies such as TV and radio reconfigures public and private spaces. 19th and 20th century technologies therefore have always been part of the way in which space is redefined.

(5) Remediating Technology - Customizing invites uers to conceive of technology as remediated. Through cute customization of mobile media and games in the region, new technologies are linked into earlier cultural histories and media archaeologies that are distinctive from European or American models.

(6) Cute Technology - Cute is fundamentally linked to the adaptation of new technologies, such as mobile media and SNS. This phenomenon distinctively differs from Western modes of user customization modes and demonstrates that technologies are much socio-cultural as they are industrial.

(7) SNS in Asia - Unlike Western or European social networking systems (SNS) that are consumed by children and teenagers, in Korea's Cyworld both young and old engage in the politics of cute representation online as a reflection of offline identity. Because of such localized features of not only the SNS, but its specific geographical and cultural audience, its success outside of Korea (and the Korean diaspora) is far from assured.
Posted by Allan at 7:42 PM No comments:

If you're looking for a good read or something for the Christmas gift shopping list, Accidental Billionaires is worth a consideration. A quick and delicious read, the book reveals lurid details of Facebook's rise from the ashes of Mark Zuckerberg's laptop to the top of the social media empire. The story of Facebook in essence reveals the very primordial needs of social media: to connect, both in a digital realm and in a physical sense. The cast of characters that led to the modern day story of Facebook is one of seamy deception, corporate sleaze, and cutting ambitions. Author Ben Mezrich puts it best when he points out that at the heart of Facebook's origin was a simple connection point for young adults:

Online, it would be the same thing; the thing that would drive this social network was the same thing that drove life at college -- sex. Even at
Harvard, the most exclusive school in the world, it was all really about
sex. Getting it, or not getting it. That's why people joined Final Clubs.
That's why they chose certain classes over other ones, sat in certain seats
at the dining hall. It was all about sex. And deep down, at its heart,
that's what [Facebook] would be about, in the beginning. An undercurrent of
sex.

If you don't have much time for reading, then perhaps waiting for the movie Hollywood version could be another option. It's coming out later this year.

What becomes of public reference libraries when research from home is so convenient, and so easy?

"I used to live in reference libraries," he said, but added that now he prefers staying at home and doing his research online. He said he'd recently asked a reference librarian what she'd been doing with herself lately. She'd said..."editing Wikipedia."

. . . said Douglas Coupland in a recent interview he had in Toronto after a reading when he took a potshot at libraries across the world with his apparently innocent quip about the demise of the gates of bricks and books. Much has been said in not only library literature, but in popular writing, too, about the value of public institutions such as libraries. The same goes for academic libraries, where Daniel Greenstein, vice provost for academic planning and programs at the University of California System, told a room full of university librarians that "the university library of the future will be sparsely staffed, highly decentralized, and have a physical plant consisting of little more than special collections and study areas."

It's unnerving to imagine the library of the future as differently as it is from the current day library. But perhaps this is innovation, a reinvention of the model of librarianship as technology transforms society and culture. Librarians need to continually inject fresh ideas to the profession; although, easier said than done with institutional bureaucracies and hierarchies which often overshadow creativity. Decentralization is necessary; and it's about time, too. In my opinion, librarians need to focus on their specialties, and here are some ideas:

1. Research - Librarians need to specialize, and focus on information retrieval. Reference should be conducted by front-line staff; librarians, on the other hand, should do in-depth research which requires more than a duration of a few minutes of a reference transaction. These types of ibrarians should be rebranded as "social science researchers" or "business researchers" to reflect the high quality of work that they do behind the scenes. With the internet and such easy access to information in this connected world, quality reference is the only way to save not only the value, but the public perception of a librarian's work.

2. Collection Management - The literature and lingo says it all: libraries are moving from the physical to the digital. Some public libraries have adapted and increasingly take a proactive bookstore model. Some have even branded this as Library 2.0. But that doesn't seem to be enough. Libraries must start thinking of breaking down a century-old mindset of a Taylor-ist model of operations and to one which requires creativity and economy. Can libraries ever be purely digital online libraries? Can they merge with bookstores? Churches? Malls? Can academic libraries, one of the most traditional institutions of most universities, be ever able to merge with classrooms and student service centres into something extremely unique? We're not talking about learning commons; we're going beyond just the library. To something unthought of yet.

3. Marketing - Fundraising, advertising, communications. Librarians have not been successful yet in the translation of important issues like open access and digitization to a public mass audience. Yet, why is it that corporations like Sony do such a remarkable job at Bravia HDTV and makes masses salivate? Brand management is a niche that libraries must develop even though it's the least of the priorities of librarians. This must change - marketing, social media advertising, event promotions - are the saviours of a languid institution. Libraries are also public spaces; yet, it never attains the same prestige as art galleries or museums. If we expect to survive and achieve relevance, we must adapt.
4. Classifications & Technologies -What is a librarian without knowledge and information management skills? Librarians need to be innovators with not only socia cataloguing, but ultimately the future of the web. Katherine Adams has argued that library and information science and computer science have lots in common in the next version of the web, namely the Semantic Web. These types of librarians, rather than work in inhouse libraries, need to join R&D laboratories, research institutions, and teach in higher education. They need to join the ranks of the intellectual elite.


archives remain, largely, material repositories of cultural memory. It is an accepted historical problematic, however, that culture is often resistant to material preservation. There exists an undeniable and profound tension between scholarly efforts to reconstruct history and interpret cultural traditions and the fragmentary, and often limited, material record. That is to say, scholarship is shaped by a sinuous negotiation around the historical silences that encompass all of material culture. Historical silences, however, can at times be marginalized (or at best excluded) by a sensitive configuration of material evidence with oral history.

The new generation archivist should be motivated by the long term preservation of moving images and by the invention of new paradigms for access to celluloid, tape, bits and bytes. It should be rooted in historical, practical and theoretical study - and rather than limiting itself to one methodology, it needs to assign equal importance to heritage collections and emerging media types. 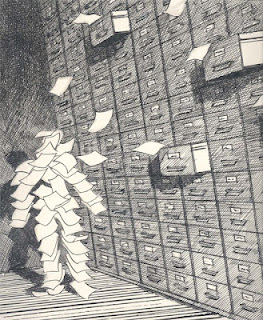 One example of innovative ways of recording the past is UBC's First Nations Studies Program's oral history archive projects. In particular, Interactive Video/Transcript Viewer (IVT) is a web-based tool that sychronizes a video with its transcript, so as users play the video, its transcript updates automatically. In addition to searching a video's transcript for key words and phrases, and then playing the video from that point, IVT includes a tool that allows users to create a playlist of clips from interviews for use in meetings. While it took historians thousands of hours of transcription work, IVT transcribes in real-time. These are the types of technologies archivists need to be aware of, in order for us to create active archives. And this is where information professionals need to be aware - to anticipate the needs of its users.
Posted by Allan at 10:07 PM No comments:

How Much Is Too Much?

Ruth Connell's Academic Libraries, Facebook and MySpace, and Student Outreach: A Survey of Student Opinion is a sober look into how not to use social media. From the results of her survey of college students at Valparaiso University, a one-size-fits-all model simply does not work when it comes to using social network sites for library outreach. Because of privacy features, librarians must intrude into the social private spaces of its users if it wants to have access to its outreach audience. But surprisingly, Connell's research reveals that students actually resent a library/librarian's intrusion into their private space. As the article argues, it is important not to annoy students but rather let them come to the library on their own terms.
This is a fascinating analysis, and one worthy of a closer look by all librarians who wish to use the trendiest technologies as outreach to their user populace. For a while, the Web 2.0 mantra encouraged most to try out new ideas, new concepts, cool technologies. But now that we've reached a plateau in the development of social media, concerns such as privacy, copyright, and best practices must be kept in mind by librarians information professionals who need a fine balance with the public and private space of their users.
Posted by Allan at 12:31 AM 2 comments: