The Race to the Past

Although Read Write Web calls it the ongoing game of cat and mouse between China and Google, in my opinion, this hearkens back to the long history of colonialism in the 19th and 20th centuries. Much of this tension stems from the Chinese government's suspicion and fear that Google is essentially bypassing Chinese firewalls and spreading Western influence into areas beyond Chinese control. Certainly, from a Western-centric viewpoint, this has always been about democratization and intellectual freedom. However, the same could be said in 1839, when the British aspired to open the doors to China for trade. Hence, the Google vs. China standoff is very much a commercial venture could very well be more about commerce than democracy. Instead of pulling out of China, Google certainly realizes the enormous wealth and lucrative markets of the Chinese, and it simply can't continue as a multinational giant by bypassing 1.31 billion of the world's population.

For that reason alone, rather than pulling out altogether, Google sidestepped any potential conflict this past winter by automatically redirecting its users from Google.cn to Google.com.hk, its Hong Kong search engine. This redirect, which offers unfiltered search in simplified Chinese, has been working well for its users and for Google, as it reports on its latest blog entry.

However, the PRC has stepped up its firmness, as government officials have made it clear that the automatic redirection to Google Hong Kong is no longer acceptable. Google's solution? Instead of redirecting users directly from Google.cn to Google.com.hk, the Chinese homepage will now simply link to its Hong Kong counterpart, which allows users to search free of censorship. As many have commented, the best Google can hope for is to find an acceptable middle ground so that it can honor its own commitment to unfiltered search results while working within the rules set by the Chinese government. And Hong Kong's Google site seems to be that solution, if not long-term, then at least temporarily.

It's interesting, and perhaps historically relevant that Hong Kong is the compromise. A landing spot for much of its history until its recent commercial success this latter part of the 20th century, Hong Kong has always been an entrepot, an entry point where migrants, travelers, and traders stationed temporarily to either evade state authorities or build support for political upheaval. In fact, Hong Kong is where the seeds of Sun Yat-sen's 1911 revolution had taken place. Almost 100 years later, Hong Kong finds itself enmeshed again between the two powers which divide the orient.
Posted by Allan at 7:47 PM No comments:

Googling for the News 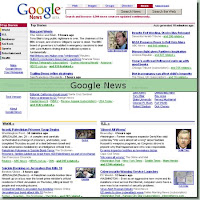 In a recent article in the Atlantic Monthly, Google is intriguingly portrayed as both the destroyer and saviour of the news industry. Certainly, while Google has forever changed the way users access the news, and practice journalism, Google also realizes it needs to salvage the industry as it is crucial to its own survival as a business.
Google's goal is to reinvent business model to sustain professional news-gathering, particularly as “crowd sourcing” and citizen journalism has transformed news coverage. As one of its executives argues, newspapers never made money on ‘news' coverage, Hal Varian argues, automotive sections, real-estate, gardening, travel, or technology had drew profits where advertisers could target their ads -- not serious journalism.
What Google (and the Web) has been done is level this into one giant system for stripping away these "cross-subsidies" current, up-to-the-minute information can be searchable. (Who searches for latest movie listings from newspapers anyways?) This type of "unbundling," as Google puts it, allows users to find the one article they are looking for, rather than making them buy the entire paper that paid the reporter, "all the while allowing advertisers to reach the one customer who is searching for their product, rather than making them advertise to an entire class of readers."
In fact, as Eric Schmidt forecasts:

It’s obvious that in five or 10 years, most news will be consumed on an electronic device of some sort. Something that is mobile and personal, with a nice color screen. Imagine an iPod or Kindle smart enough to show you stories that are incremental to a story it showed you yesterday, rather than just repetitive. And it knows who your friends are and what they’re reading and think is hot. And it has display advertising with lots of nice color, and more personal and targeted, within the limits of creepiness. And it has a GPS and a radio network and knows what is going on around you.

This is already what many pundits say the next generation web, or Web 3.0, will look like. I'm wondering if Google is just holding back on the good news.
Posted by Allan at 6:55 PM No comments:

Henry Jenkins is the creator of the Comparative Media Studies (CMS) graduate program at MIT, and can be considered an innovator in digital culture. At its core, his MIT program has encouraged students to think across media, across historical periods, across national borders, across academic disciplines, across the divide between theory and practice and across the divides between the academy and the rest of society. Although he has moved on to being Professor of Communication, Journalism, and Cinematic Arts at the University of Southern California, his blog entries continue to be as interesting as ever.

Blogs represent a powerful tool for engaging in these larger public conversations. At my university, we noticed that a growing number of students were developing blogs focused on their thesis research. Many of them were making valuable professional contacts; some had developed real visibility while working on their master's degrees; and a few received high-level job offers based on the professional connections they made on their blogs. Blogging has also deepened their research, providing feedback on their arguments, connecting them to previously unknown authorities, and pushing them forward in ways that no thesis committee could match. Now all of our research teams are blogging not only about their own work but also about key developments in their fields.

As Jenkins argues, academic programs are only starting to explore how they might deploy these new media platforms -- blogs and podcasts especially -- to expand the visibility of their research and scholarship. Watch Jenkin's ideas in this intriguing video - it certainly adds flavour to the argument of the participatory culture of learning.
Posted by Allan at 10:16 AM No comments: