Google's latest foray in augmented reality has really impressed me.  It's already done well with Google Goggles.  It's pushing boundaries of augmented reality with its latest innovation in the form of wearable glasses.   Educational experts are pointing to augmented reality as the next wave of technology to transform the way instructors teach and students learn.

Augmented reality provides a powerful constructivist experience for exploration and discovery of the connected nature of information in the physical world. It also aligns with situated learning in that it that permits experimentation and exploration to take place in the same context in which the activity occurs.  Augmented reality has much potential for serious gaming applications, as it adds an element of game simulation in the application.

In the Horizon Report, a research report published annually by the education think tank New Media Consortium that charts the landscape of emerging technologies for teaching, learning and creative inquiry, has forecast in their 2010 and 2011 reports that augmented reality as an educational technology will be a be an integral tool in education.  Imagine a student as he waves his mobile device around the room to "uncover" hidden texts and information embedded on a world map on the wall with questions and answers all there for the student to view.   Or imagine a doctoral student completing his American history dissertation scanning his mobile device over certain key hot spots in the in the Jefferson Library in the Library of Congress and being able to not only pick out each title on his device, but also open the digital book and flip through each page.

Whether Google Glasses will take off or not is beside the point: Google Glasses is one example of where "augmented reality" glasses is another step in the direction of the Internet-of-things -- where the virtual world and the real world collide and merge.  This early prototype of the Google Glasses, which is developed from the same individuals that crafted self-driven cars, can snap photos, initiate videochats and display directions at the sound of a user.  While augmented reality has been long in development, particularly by military and private commercial industries, augmented reality hasn't hit full force until just recently.   It's exciting to see where it will go.  How will libraries take full advantage of this?   Time will tell.

The Future of Libraries? Or the Nextflix of the Future? 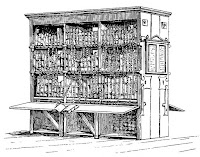 Although there has been a plethora of articles in the literature about the future of libraries, one recent ones stand out as they purposefully ask librarians to take a step back and caution about the optimistic future that Library 2.0. Steve Coffman's The Decline and Fall of the Library Empire is a particularly sobering look into the state of libraries.   With the decline of video stores, DVD and music sales, and withering of bookstores, one needs to take a closer look at how libraries will fare down the road.   Maybe librarians won't be there when the semantic web arrives; or as e-Books dominate reading experiences.  Perhaps becoming gaming centres and virtual e-Book stores might not be the way to go.  Coffman remarkably synthesizes the challenges with some highlight packaged quotes:

On cataloguing websites: "...remember those heady early days when we thought we were going to catalog the web? OCLC even set up a whole project for this task back around the turn of the century (sounds like a long time ago, doesn’t it?). It was called CORC, or Collaborative Online Resource Catalog. Librarians around the world were supposed to select and catalog “good, librarian-certified” web resources. There was even talk of assigning Dewey numbers to websites — an idea which I’m sure would have brought tears to the eyes of many, especially our patrons. Today, the only evidence you can find of CORC is a few sentences in a list of abandoned research projects on the OCLC website and some links to PowerPoints and articles saluting it — most now more than 10 years old"


On virtual reference: "...although virtual reference is still around — supplemented by “text” and SMS — it is a mere shadow of its former self. Most of the commercial vendors closed up shop. The QuestionPoint 24/7 service stays in the business, probably because it does not have quite the same profit requirement as the commercial services. The Virtual Reference Conference is gone and, while you can still find a few programs on virtual reference at regular library conferences, today it’s far more likely to be a “talk table” than a room jampacked with hundreds of avid librarians, the way it was back in the old days."

On libraries: "....the world is moving on. Each service we’ve provided in the digital arena is being superseded by new technologies or by other organizations better suited to deliver services. When Google is finished scanning it will have no more use for library collections. So after 50 years in the digital market, libraries are back where they started. Our electronic library has been built, but others own and manage it. We are left with the property we began with, physical books and buildings that house them. In reality, those are not inconsiderable assets in a world where it may be uneconomical to have physical bookstores or places where people can get together to listen to stories or discuss books and ideas....Figuring out how to exploit those assets in this new environment will not be easy."

Netflix is a stark reminder of how soluble a seemingly immovable powerhouse like Blockbuster can be driven out of the retail video business within a few short years upon the arrival of a cheaper, more accessible competitor.  Libraries are certainly aware of the challenges of space, information, and literacy.   Coffman questions that had books been inexpensive in the 19th century, philanthropist Andrew Carnegie would've spent his money elsewhere: yet, he chose libraries, for they offered a public good in promoting reading through book collections.  The Gates Foundation supported libraries in the 1990's when libraries became the forefront for providing free internet service at a formative period when service charges were unaffordable for most.

With social catalogues like Librarything, Goodreads, Google Books, and Amazon, traditional library functions are being challenged from all perspectives.   But like all other professions and services, the future is indeterminate - and whatever happens will be unrecognizable from its current form today.  Will libraries continue to be supported by public funding?  Could we envision a hybrid model of a commercialized-private industry, integrated and rebranded with online bookstores and publishers?  Or could we envision libraries being reformulated for a different mandate altogether?  Could another Andrew Carnegie come along charged with a mission to change the world, using libraries as the engine to engage communities?  Would it be in the form of books?  Or would it be a completely different service?
Posted by Allan at 4:28 PM No comments: