The Matthew Effect and the Digital Fault Lines of Learning 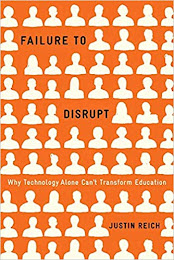 I confess that I’ve started so many MOOCs, or massive open online courses, that I’ve forgotten how many I actually completed, which is likely to be very few.   2012 was once infamously dubbed the “Year of the MOOCs” but it didn’t actually revolutionize education, not at the university/college level nor at the K-12.  I still recall with a draught of nostalgia (and wincing) when higher education administrators scrambled to push for MOOCs to be established at their institutions. My particular university called it “flexible learning” and almost overnight everyone veered towards the technology lest they would be missing out on the next educational revolution. Coined in 2008 by Dave Cormier, the first MOOC to be very successful was the course "Artificial Intelligence" by Sebastian Thrun and Peter Norvig at Stanford University in 2011, and left their positions to found Udacity. In 2012, MIT and Harvard University announced the birth of EdX. Then came Coursera. Predictions were suggested that MOOCs would spell the end of universities. Studies such as the one by Katy Jordan exposed that completion rates were dismal.
Justin Reich’s Failure to Disrupt: Why Technology Alone Can’t Transform Education reviews the post-hype MOOC world, arguing that technology cannot by itself disrupt education or provide shortcuts past the hard road of institutional change. The Matthew Effect is best summarized by the adage "the rich get richer and the poor get poorer,” and in the edtech world, it means that even new, free resources are mainly beneficial to already affluent learners with access to networked technology. Thus Reich’s three myths are really illuminating:

Myth #1 - Technology disrupts systems of inequality.
False. Technology actually reproduces the inequality embedded in systems. Poor, urban, and rural students were less likely to be exposed to higher-order uses than non-poor and suburban students. Rather than rearranging practices in schools, new technologies reinforce them.

False. Free things benefit those with the means to take advantage of them. Research shows that those who use MOOCs or sign-up for wikis tend to be from affluent neighbourhoods.

False. Social and cultural barriers are the chief obstacles to equitable participation. As they are often harder to discern, “digital divide” is too simple a metaphor to characterize educational inequity.   Because social and cultural barriers are harder to measure, it's often missed in the design of edtech.
Reich suggests that students from less developed countries actually face an obstacle called “social identity threat” which can occur, for instance, when:

the elite branding of universities offering MOOCs, the predominantly white American and European faculty who offer these courses, the English language usernames in the forums, and other markers that feel excluding to minority participants. Feelings of social identity threat can lead to negative recursive cycles: when people start a class, they may feel like an outsider.

It's sobering for an individual like me who has been fortunate to work in a large educational institution in a developed economy.  Though the training I have had as an educator builds technology around connectivist and constructivist theories, I also realize much of what I do for my students is based on privileged assumptions.   Reich's book is such a thought-provoking exercise.  Would you have another title you'd recommend here?
Posted by Allan at 2:27 PM No comments:

Racial Capitalism and the Inequity of Merit 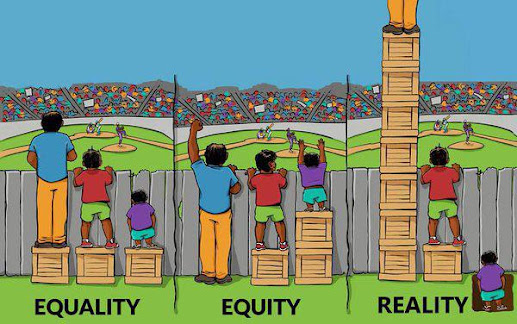 Sylvia Vong’s Not a token! A discussion on racial capitalism and its impact on academic librarians and libraries is such an important piece in the LIS and CRT literature. This piece hits home for me what is racial capitalism: the commodification of the performance of one’s racialized identity in specific settings identified by the dominant group. Many years ago, I remember attending an interview when a candidate named dropped a bunch of EDI initiatives, including my name, during an interview. Not only was it the first time I came across pure strategic performativity at an interview, but it also helped me understand now that I have the tools, to see it for what it was:

Vong’s piece is important as it lays out the truth with salient categories:
Damn the Meritocratic System?

It’s dangerous to assume neutrality in society, which is reflected in the workplace. In promotion and tenure/permanent status evaluations, procedures and policies may appear impartial, but decisions are often made by small groups of library administrators or elected colleagues. These evaluative processes are prime for bias and, although it can be argued that rubrics of evaluation help to restrict hidden prejudice, “they are typically constructed and draw on institutional and organizational goals and objectives that mould librarians into the image or vision of the organization.”

Vong offers words of encouragement as a way out: we need to introduce CRT in leadership and training as well as properly fund EDI work. This needs continued emphasis from leadership in organizations. Whether it’s a 400-person library or a three-person hospital library, change and inclusion require work that goes beyond tweaking tokenistic gestures.
Posted by Allan at 3:10 PM No comments:

The Homophiliasm of Hiring - Are You The Right Fit? 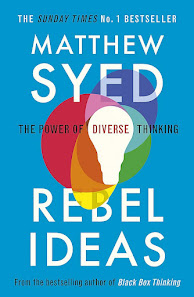 I recently came across a terrific book by Mathew Syed, Rebel Ideas, which suggests that individual intelligence is not enough to tackle really important problems. Rather, cognitive diversity and collective intelligence always win out. Syed draws from the literal intelligence breakdown that happened among agencies during the 9/11 attacks by exploring the diversity of the CIA:

startling high proportion of staff at the CIA had grown up in middle-class families, enduring little financial hardship, or alienation, or extremism, witnessed few of the signs that act as precursors to radicalization, or had any multitude of other experiences that might have added formative insights to the intelligence process. . . As a group, however, they were flawed. Their frames of reference overlapped. This is not a criticism of white, Protestant, male Americans. It is an argument that white, Protestant, male American analysts – and everyone else – are left down if they are placed in a team lacking diversity.

Hiring more diverse candidates doesn’t equate to cognitive diversity. Building collective intelligence cannot be a box-ticking exercise, or else, diversity basically turns into dominant assumptions of the group, and the leadership teams look diverse but continue to share nearly identical views, insights, and patterns of thinking. Successful teams are intentionally diverse, not arbitrarily. Diversity contributes to collective intelligence only when it is relevant – in other words, hiring without empowering doesn’t work.

Homophily is a term that is so apt in these situations. It’s the principle that contact between similar people occurs at a higher rate than among dissimilar people. But because homophily means that cultural, behavioral, genetic, or material information that flows through networks will tend to be localized as well, this is often reshaped intentionally (or unintentionally) in the workplace.

Looking back at my own experience, I'm used to hearing the word “fit” in hiring committees. I didn’t know it at the time, but it’s a euphemism for how candidates were “ranked” based on similarities to the rest of the staff. According to Syed, the Higher Paid Person’s Opinion (HIPPOs) is the deciding factor to final hiring decisions (or any decisions for that matter), and that’s dangerous. The trickle-down effect results in groupthink: there’s no incentive to have a diversity of perspectives; after all, it never pays to speak out.

But if we return to the CIA case study, the story ends on a more comforting note. The CIA realized it had diversity blindspots, and hired one of its first African American Muslims, Yaya Fanusie, who made an immediate impact as a counter-terrorism expert, and helped foil a terrorist attack before it happened. History would never record this as the incident never occurred.
Having a diversity of people and ideas – rebel ideas – is critical for strong organizations. Libraries don’t tend to look hard at their “diversity problem” (or perhaps to them, diversity is the problem), Sometimes, the larger libraries ask why they are mediocre and decide to hire a revolving door of external consultants to task them to find out. But if we look hard at homophily as a problem in itself, hey, that would be a good start, don’t you think?
Posted by Allan at 2:40 PM No comments: