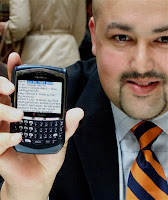 Siva Vaidhyanathan, who is entertaining as he is informative, is a cultural historian and media scholar (a rare combination these days), and teaches Media Studies and Law at the University of Virginia. His ideas and concepts are multidisciplinary -- Vaidhyanathan has even coined the field of studies, “Critical Information Studies” which synthesizes key aspects of both Cultural Studies and Political Economy by interrogating the “structures, functions, habits, norms, and practices” of particular aspects of information culture.

One of the preeminent historians of American copyright, Vaidhyanathan's arguments often examines how these issues go beyond simple arguments about digital “rights” to include consideration of the more subtle impacts of cost and access that have the potential for chilling effects on a “semiotic democracy” that is situated in “global flows of information.”

CIS is an intellectual antidote to the the Web 2.0 social media phenomena, and offers the tools to analyze the Web more thoughtfully and carefully. But CIS is an exciting field, just as it is beginning to take shape and gain its own sense of identity. Afterward: Critical Information Studies - A Bibliographic Manifesto is required reading for those interested in CIS as it provides a detailed "taxonomy" of disparate disciplines which comprises the CIS. These disciplines include American Studies, Anthropology, Communication, Computer Science, Cultural Studies, Ethnic Studies, Legal Studies, Library and Information Science, Literary Studies, Media Studies, Musicology, Political Science, and Sociology. Interestingly, since Critical Information Studies cuts across these and other more traditional academic domains, Vaidhyanathan describes this as being a "transfield."
Posted by Allan at 8:41 PM 2 comments:

The Problem of Information Overload 2.0

Renowned psychology Barry Schwartz famously coined the term "paradox of choice" which stems in the research in his book with the same title. In his findings, Schwartz integrates various psychological models for happiness showing how the problem of choice can be addressed by different strategies.

Web 2.0 has not made life any easier for us, even though the tools might seem as if they're saving us time and space. If anything, Web 2.0 has a byproduct: an overabundance of information - and with that - choice. As I've argued in an earlier post, I point out:

Information professionals face a plethora of choice each and everyday of our
working lives, from what brand of coffee to buy in the morning to the database
we want to conduct for a search. So many choices, so little time to choose.

Here are some of the social media services that I use: Twitter, CiteULike, and Del.icio.us all have their advantages and disadvantages. Ultimately, I've found that social media has been a mixed blessing. Not only has information overload produced sometimes confusion as to prioritizing my resources (Youtube first, or Facebook later?), so many tools results in a saturation of user ID's and passwords. Ultimately, we can only have so many sticky notes to remedy our overload of passwords, particularly as services ask for different combinations of numbers, letters and capsizes.

The Semantic Web, as mysterious as it may seem to most, might be one opportunity to solve this password/ID overload. Whereas Web 2.0 is about searching, Web 3.0 is about finding. Imagine a web in which logging in to any browser can bring up personal settings that have been uniquely tailored and customized according to your needs and preferences. In this utopian web, the social mayhem can at least be organized.
Posted by Allan at 6:57 PM No comments: 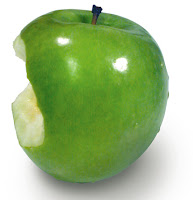 In Week 2 of social media bootcamp, aka. LIBR 559M, affordance is a key theme in examining the use of social media. Affordance is an interesting concept in social media and Web 2.0. According to Wikipedia's entry, affordance is a "quality of an object, or an environment, that allows an individual to perform an action." Different technologies can be viewed under this light -- just how much affordance does each have, and how can we use these same principles in examining social media? With new tools emerging so rapidly, it's a challenge to keep up, let alone using them effectively in our every day work as information professionals.

Let's take a look at telephones: Telephones allow the placing and receiving of calls, which in isolation are not affordances, but which substantively enable the affordances of communication and information exchange. First coined by perceptual psychologist, J. J. Gibson who used it as a core component of his ecological theory of human perception, affordance is now used in a range of fields, including but not limited to cognitive psychology, industrial design, human-computer interaction (HCI) and interface design, and artificial intelligence. The Learning Affordances Wiki discusses six key points about affordances, and each has the potential in helping explore the affordances of any social media technology.

1. Positive and Negative - Affordances can be useful or a hindrance

2. Fit for Context - Affordances have to be fit for purpose - be aware that it may not work everywhere.

3. Changing Contexts - Because affordances do not transfer to each context, the learner must create and develop new affordances, to develop the ability to match a particular affordance to the context.

4. Ontologies - Affordance is relational, an adaptation – its part of a complex adaptive ecology.

5. Perception - Affordances are inseparable from perception. We perceive affordances rather than objects.

7. Mastery - As a professional, there must be an ability to discriminate between contexts, which means being embedded in one's micro-culture and community as well as one's individual identity.
Posted by Allan at 7:05 PM 1 comment: 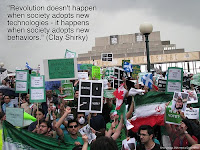 I'm currently taking a course on social media at the School of Library, Archival, and Information Studies (SLAIS). I must admit: I'm deeply impressed. Much to my surprise, LIBR 559M avoids the Web 2.0 hoopla that was so popular with literature and workshops; instead, it examines social media (i.e. blogs, bookmarking, mashups, wikis, social networking sites), its concomitant trends (i.e. web 2.0, library 2.0) and how web 2.0 principles can be applied to the delivery of information services in the digital age. Some goals that LIBR 559M aims for are:
I'm quite excited about this course. Even though this is only the first incarnation, I have good feelings about the content and where it's going. With the recent lull in Web 2.0, we've come to the realization that new ideas, new concepts, new designs are needed to reassess the impact of social software and media. This course is a good start as it challenges the existing courses on how social media can and should be taught.
Posted by Allan at 1:27 PM No comments:

The Birth of the Digital Novel (Digi-novel) 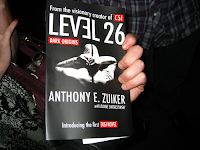 Publishing is going to get a whole lot more interesting. Anthony Zuiker's new book, Level 26: Dark Origins is an interesting concept which combines three types of media: book, movie, and website. Zuiker, creator of the "CSI: Crime Scene Investigation", is releasing what is to become a new genre of literature, the "digi-novel" -- which amalgamates the three media -- and in doing so, challenging the boundaries of traditional book publishing. Anthony Zuiker believes the "digi-novel" will launch a "revolution in publishing for the YouTube generation."

Level 26: Dark Origins, to be published by Dutton Sept. 8, is the first in a series in which each book will be supplemented with 20 videos, or "cyber-bridges," featuring actors playing characters from the novel. The series, written with Duane Swierczynski, features a rogue investigator who hunts serial killers. In referring to to 25 levels used by law enforcement to classify serial killers, the digi-novel introduces readers — and viewers — to level 26.

This is an experiment. Perhaps too early to call as a 'revolution' for writing and publishing. But it certainly does cast libraries in a different light. It moves beyond the physical borders of shelf-space, and into the realms of the digital web, and beyond. How do we catalogue products and media that have no specific guidelines, not even in the AACR2 and RDA? As an experiment to better engage readers, this 384-page innovative digi-novel will be more than just a book on the shelf, as readers (viewers?) can watch the story on film and log in to unlock deeper levels of the experience. The experience has begun.
Posted by Allan at 11:18 AM 2 comments: