I was invited to take part in a panel as part of the Canadian Academic Research Libraries (CARL) Equity, Diversity, and Inclusion webinar series.   It was an exhilarating panel discussion and rewarded me with a lot of deep reflection over my years as a racialized librarian.   In my preparation to the talk, I had re-read Dorothy Kim's article piece, “How to DecolonizeDH: Actionable Steps for an Antifascist DH” is one of the best I’ve come across addressing the historic white supremacy in DH and what some DH scholars have proposed to initiatives and issues with openness, race, disability, LGBTQ, feminist, and other kinds of non-normative bodies in the field.    Dorothy is a professor of English, and is one of my favourite DH’ers.   In this article, she outlines a set of practical steps to #decolonizedh, to make it less white, to begin working on an antifascist DH.   I thought it would be interesting to adapt her proposal to LIS.  What if we were to integrate her ideas from one very white field to another?   How do we de-whiten LIS?   Here's what I came up with, with inspiration from Dorothy.“If you build it, they will come” is a myth - LIS needs to be more intentional in recruiting and retaining scholars of colour and scholars working by incentivizing their presence.

LIS needs to stop being defensive about its whiteness - Instead of insisting on compiling a list of “projects” about communities of colour, LIS needs to protect those at the margins who are being attacked. It’s necessary to be proactive and digging in to help, fight back, and do the work against white supremacy.

LIS must stop ignoring critical race theory and postcolonial/ decolonial theory - LIS needs to ask how to dismantle and decolonize its standard histories, epistemologies, and methodologies. It needs to question its stance on science, which neutralizes the intersectionalities. Scholars have challenged the neutrality of ‘science’ in LIS and one even has suggested that LIS education itself has become “technocentric, male-dominated and out of touch with the needs of practitioners”.

LIS must have separate funds for inclusive projects - LIS needs to earmark separate money for projects related to and run by communities of color, graduate students, faculty and researchers of colour. It must be separate and specifically geared to expand this range of work, give credit, give funding, give resource help.

LIS must stop writing narratives that ignore other entire fields - LIS has often had difficulty defining itself, and within these identity crises, it’s had a tendency to subsume topics, methodologies and scholarship and pass them off as LIS’ interdisciplinarity.

LIS methods must not be only about tools - LIS classes must stop being just about technology. They must include a balance of discussing critical issues like race, gender, disability, multimodality, sexuality, etc.

LIS must fund developing scholars of colour - LIS training needs to directly give scholarships and particularly try to assemble groups to help potential scholars of colour to learn new skills but also these groups can allow people to talk to each other about some of the issues they see at stake and potentially find other collaborators.

LIS and the Rooney Rule - First started in the NFL as a requirement that at least 1 minority must be interviewed for every senior position. Some companies have begun using this hiring rubric, but LIS needs to institute the Rooney Rule for every position, every major grant, every major conference keynote and panel.    Some disciplines, such as Communications and Sociology, is currently tackling this problem of perpetuating citational segregation and the ghettoization of research.   LIS must address this as well.
Posted by Allan at 2:12 PM No comments:

Outreach and Programming: A Three-Pronged Model to Community Engagement 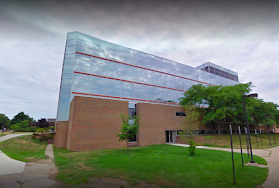 There's much in the research literature about community engagement and outreach for libraries, some of it interesting case studies of partnerships, others are interesting programming stories with some tips and tricks for best practices.   But one of the more interesting pieces that I came across recently is from the Oakland University Beaumont School of Medicine which reviewed the last seven years documents its outreach program's initiatives targeting both members of the university as well as the local community.  What's interesting is the thoughtful approach by its library in the form of a three-pronged outreach model that it suggests could be adopted by other libraries.   The authors of Community Engagement at an Emerging AcademicMedical Library: A Three-Pronged Outreach Model share a very useful and practical three model:

Partner - Between relevant stakeholders and groups to co-develop and host outreach activities.

Create - These are library-driven initiatives, where the library is the primary driver of an outreach project or activity.  This puts the greatest strains on library time, staff, and resources but provides the library with the greatest degree of control and the least difficulty with issues such as coordinating schedules.

But as good as models can be, the authors suggest two areas of best practice that should be considered when developing a community engagement plan, which I find to be truly appreciate and can find useful for my own work in this area:
Assessment - The methods and quality of assessment used by libraries in outreach activities vary drastically.   While metrics could include things such as participant attendance, money raised, student application of information literacy skills, how does one measure success in engagement?
Long-term planning - Succession planning is difficult with staffing and leadership changes.  While the literature points to long-term goals early, initiatives do sometimes just naturally fade away.
Posted by Allan at 6:52 PM No comments: