The Web of Things

The Web of Things mean different things to different people. Some argue that the Web of Things will be the crucial ingredient for the realization of Web 3.0. Dominique Guinard is at the forefront of this cutting edge technology, and is researching on the very idea of connecting people and objects on the web. Keep an eye out for him. You might hear about him one of these days.
Posted by Allan at 11:55 PM No comments: 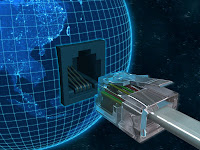 The definition of Web 3.0 is as elusive as it gets. However, it's getting much clearer than it was one year ago. Many of the technologies in the Web 2.0 world are paving the way for the next version of the Web. The elements of augmented reality and locative media that the iPhone has shown us in its brief history is indication that the web extends beyond the digital world.
Some web experts believe that combining the digital and physical worlds requires the help of hardware devices that can layer on top of the reality the information retrieved from the cloud to a user’s accounts on various sites. Whereas the social web exists in a predominantly digital atmosphere, Web 3.0 extends to a physical realm where Internet-connected “social devices” faced with a local problem can “talk” with other artifacts that can provide their experience about that situation, or likewise offer information that may help to come up with a solution to the problem.
What does this all mean? More to come in upcoming postings.
Posted by Allan at 12:32 AM No comments:


"You don't get to a 500 million friends without making a few enemies."

With those epic words, the tone has been set for this what must be the most enigmatic movie of the summer. What does the world really think of Mark Zuckerberg? Adapted from Ben Mezrich's The Accidental Billionaires, The Social Network adds an element of mystique to the rise of Facebook. It's been six years since the release of Facebook, so what have we learned about it? What are your thoughts about Facebook? Here are mine:
1. Socializing Has Changed - "Friending" has evolved from merely adding friends and strangers. It's changed the way we make communicate, the way we talk, email, instant message, even our phones. How do you find someone? You don't - you Facebook them.
2. Business Is About 'Stickiness' - Entire businesses have been built on Facebook. Think of the social graph, and how it's leveraged the idea of 6 degrees of separation into a new entrepreneurial paradigm. Applications like Faceconnector integrates CRM and the data produced by Facebook into entirely new social tools for business. In less than 5 years, Facebook has indirectly helped many businesses earn a lot of money; if that isn't making friends, what is?
3. Software Is Lighter - Cloud computing and software-as-a-service have forever altered computing. While the cloud has provided over-the-Internet virtual resources eliminating many services, SaaS has similarly afforded inexpensive way for businesses to use software as needed rather than license devices with applications. Why settle for a hard drive when you can upload to Xdrive? How about Gmail on the go? Facebook is not only a social network, it's an entertainment and social service.
4. Privacy Has Changed - Things have never been quite the same after Facebook. Whereas before, one had to create a homepage to get noticed, Facebook has made everyone a celebrity. This commodification of status has its drawbacks though: you no longer can hide yourself, and whatever we, where we go, has its digital traces. Sometimes, it's just better to block it out.
Posted by Allan at 7:00 PM No comments: